Home Java Stream API: The Hero Without a Cape

Stream API: The Hero Without a Cape 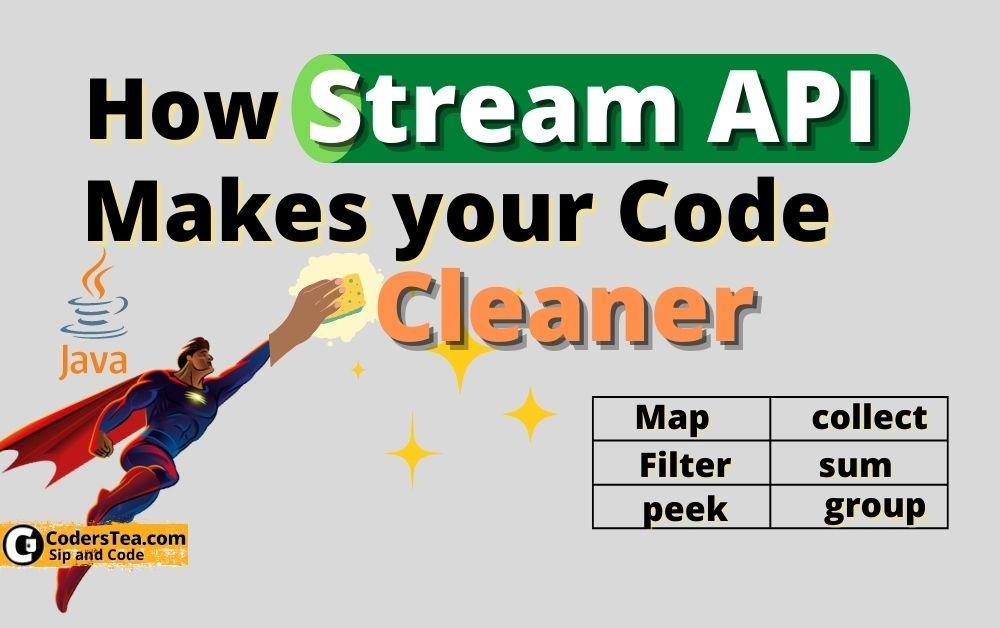 Hey Tea Lovers! In this post, we will be talking about an unsung hero of the Java world, the Stream API which was added to Java 8 and has changed the way we do programs in java and how! It added neatness as well as made the program more readable. It helps you do functional programming in Java. Without any further ado, let us read more about this jewel.

What is Stream API

The Stream API, included in Java 8, is utilized for processing collections of objects. It is the flow of Objets on which various methods get applied in the pipeline to have the result. Simply put, it flows through the given Collection<Object> and applies the different methods on the Object to aggregate them into the desired result without affecting the original Object.

Stream doesn’t store anything instead, it operates on the given Collection, Array or I/O (yes you can use it on I/O) Without changing the original data, it applies the methods to the data. Lazy evaluation helps to add multiple intermediate operations without actually utilizing them at the moment of building it. It gets evaluated only after our terminal operation. The Stream API also adds neatness to the code to make it more readable. And yes, Functional Programming is a key feature.

Stream allows you to do functional programming in Java. This means you should be comfortable with functional interfaces and lambda. Don’t worry, You just need the basics of it, which you can do with the help of this post, “Be More Functional With Java’s Functional Interfaces”. If you know these well, nobody will stop you from implementing the Stream APIFor the examples used in this post, you can find the code on GitHub here or the full project here. And yes, fill your cup of tea, start sipping and see more about this hero.

How to use Stream API

We can do this in multiple ways. Such magic tricks are,

1st and 2nd are what we use most often. For our discussion, we will be sticking to the Collection’s stream method. For Example,

We can perform two operations on a Stream pipeline

Intermediate Operation transforms or filters the object in the preceding pipeline. These methods are nothing but the functional interfaces we discussed in our previous post. You should get familiar with them to easily understand this operation without any trouble. Stream won’t execute intermediate operations unless a Terminal Operation gets called.

You can pretty much everything inside a single stream pipeline only.

Now, let us see these operations one by one.

In the Stream pipeline, we can have multiple intermediate operations that transform or filter the data which will be flowing toward the next pipe without affecting the actual data on the Collection. These operations return the Stream of the desired result instead of the actual result i.e Stream<T>. With this, we can add more intermediate operations without breaking the Stream pipeline. We will be talking about the map and filter in this post and others in another part. map and filter are the ones you will be needing most of the time.

These methods are applied one by one to the elements in the pipeline and not all at once.

Think of it as a transforming function, which transforms the given object into another. It accepts a Function<T> as a parameter, which takes the element in the stream as input, performs some operation, we tell it to do, and returns Stream the resulting object. Learn more about Function it here.

In the above example look at how we transformed a list of Integer to the String. Let’s break down it.

The filter, as the name suggests, filters out the elements before it reaches the next pipe. Simply put, if the element satisfies the condition it allows it to pass through otherwise it won’t allow for the next operation. It takes an Predicate as a parameter. Know about Predicate here.

God, so many filters. let’s break this down, shall we?

Till now we have seen the operations which perform something in the pipe and return the stream. In the end, we will be needing a final result, which is not a stream, don’t we? That’s where Terminal Operation comes in. It does not only give the desired result but also starts the Stream. As I said, Stream is lazy, it won’t do anything, no matter how many intermediate operations we add to the pipeline, until and unless it sees its end, the terminal operation.

You cant use the same stream after it was closed by a terminal operation. Otherwise, it will throw IllegalStateException: stream has already been operated upon or closed. You have to start a new stream

The terminal operations we will be using for our examples are forEach and count. Let us examine them and a few others.

This iterates over each element passed by the preceding intermediate operation. It takes input but has a void return value. It takes Consumer as a parameter(more on Consumer). Use this if you want to do something without returning anything. We have used it for printing the numbers.

As the name suggests, it is used for counting the elements reached to the end. Like in the filter example, counting the number who satisfied all the filter’s conditions.

I use this more often than any other terminal operation. It allows you to create the Collection form of the elements of the stream after processing them. These Collection can be List, Set or Map. The Collection includes elements that passed through the last pipe.

In the pipeline, we multiplied the number by 5, then filtered numbers less than 30 and added 2. And after all the elements are done process, we collect them into the list.

We have studied what is Stream API in java, how to obtain it, how to operate it, use it. This post is kind of like an introductory post for the Stream API. There are so many diamonds in the Stream mine, which we will be mining in the next post. I highly recommend you check out “Be More Functional With Java’s Functional Interfaces” for a better understanding of the Stream API operation. You can find the code on GitHub here or the full project here.