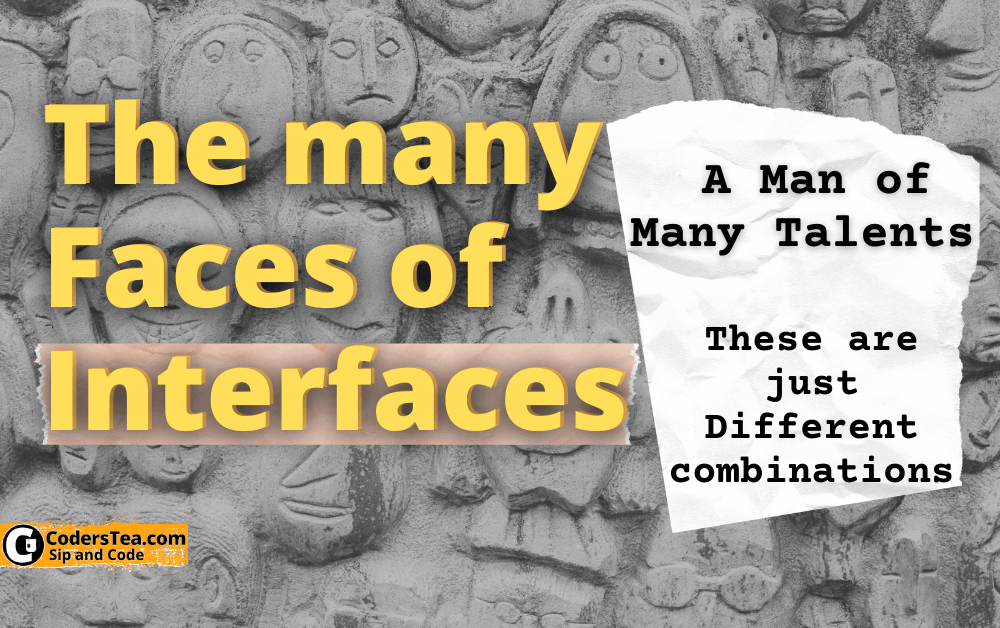 Hey, Tea lovers! before talking about Java Interface, Have you ever heard the phrase, “Man Of Many Faces”? if not, it means a person can be of everything or anything when it comes to portraying something. It can be one thing and a minute after another without losing its strength.

Java’s interface fits perfectly with this title. It is an integral part of java and has become so powerful over the years, that it shifted the way a Java programmer thinks. It has added various ways of doing things in Java. Depending on the number of methods only, an interface’s definition as well as the object-creating process changes.

By definition, it is a template for classes through which you tell classes what you need to do and NOT how to. These contain abstract functions or methods that, when implemented, need to be overridden.

Now, as I said, It is a template that tells you what to do and not how to. Well, sometimes you need to tell someone how to do things, don’t you? A typical scenario would be when an interface is already published or it is being used in a project far away and you need to add one more function to it. Now if you add one more abstract function to it then boom, now classes can’t be compiled since they need to override this new function. If we use the default function, it lets you define default behavior for the function in case classes can’t override them. However, you can override them if you want to.

Look at newly added functions on  Collection classes such as stream(), parallelStream() ,  spliterator()  and many more. It provided you with the functionality without actually implementing it in the classes.

In Java 8, adding lambda support on these functional interfaces has given rise to a new approach in Java, and that is Functional Programming. It surely  makes the code less cluttered and with the Stream, it changed the way a Java programmer thinks.

So these were the many faces or simply put, an interface’s various parts in general. How a single interface changes its behavior with just a certain number or keyword attached to a method? I hope you liked the post and please do comment if I have missed something. Any help would be appreciated.

You can find the code on GitHub here or the full project here. See you at your next tea time.

The 3 Stages of Microservice: Divide, Conquer, and Chaos