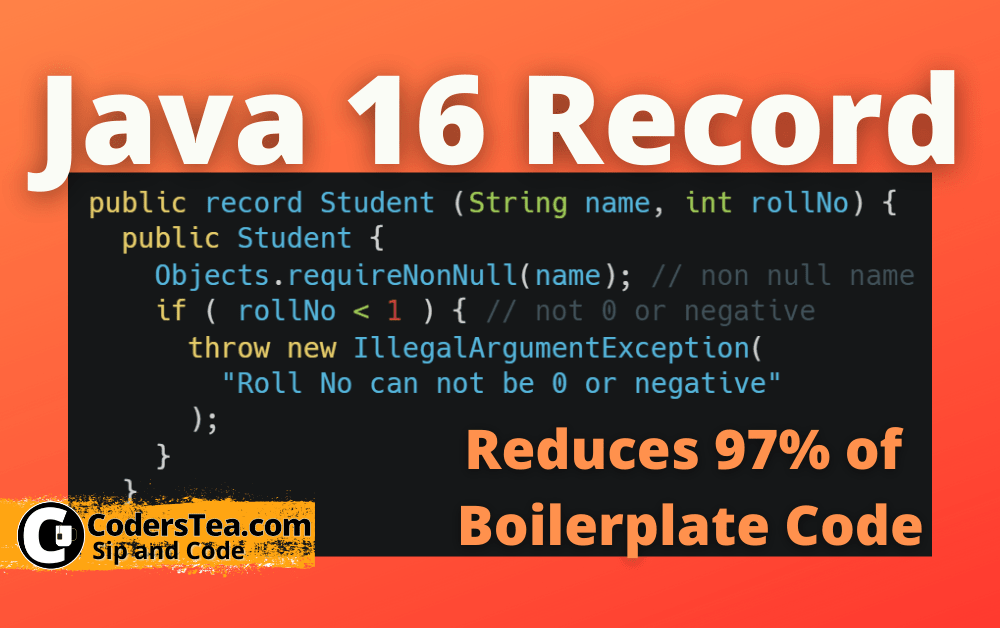 Hey, Tea Lovers! Java 16 is released a few days back, well, a month to be precise. It introduced 17 new features. I discussed the 4 features that the developer will use a lot in my previous post, Simplified Java 16 Key Features. In this post, we will deep dive into Java 16 Record to see how it helps us to reduce the boilerplate code of POJO classes.

Whenever you need a simple class to hold the data, you write a POJO class, right? But Even though your need is simple, you need to write tonnes of code for just a few things. Such as getters and setters, constructors, toString, and equals and hashcode. No matter how many different POJOs you write, you have to write these 90% similar methods. These things with little to no changes that we have to write again and again for simple purposes are known as Boilerplate code.

In the above example code, all the lines after line number 4 are boilerplate codes. Whatever class you create, only the fields will change and everything will remain the same. One other example of such a thing is JDBC connection initialization.

One solution to POJO Boiler Plate Code is Lombok

To overcome this POJO boilerplate code, there is a library called Lombok, which helps you to resolve this situation with Annotations. With this, your POJO only contains the fields that you need to hold the data and nothing more except a few Annotations. And I use this in every Java project I work on. You can learn more about it in my previous post, Say Good-Bye to Boilerplate Code with Lombok: Part 2-The Code.

See? How does all that boilerplate code get reduced to a simple @Data annotation? Cool right? But this is an external library. You have to add the dependency of Lombok in your project. And your IDE needs the plugin for it to work. (The latest versions of IntelliJ support the Lombok without any plugin now, which is a good thing).

However, starting Java 16, we won’t be needing it anymore. These additional things will be taken care of by the compiler itself with Java 16 Record. Let’s jump to it and see how. But before, prepare your cup of tea to sip and code.

The Things Java 16 Record Do for us

Before jumping into how to use Java 16 Record, let us first see what we are trying to solve here. As I already mentioned that you need to create a lot of boilerplate code to simply hold the data. With Java 16 Record you get all these things without any extra work. It generates all the boilerplate code we talked about. In addition to that, we don’t even need to declare the access modifier and final keyword. The things Java Record provides are,

We will now explore the Java 16 Record and will see how to use it. I discuss the above-mentioned list one by one.

How to Create a Java Record

Let us start with creating one Record. It is simple, you only require the name of the Record and the fields you need in that record. After defining parameters in the record, these fields will be private and immutable, meaning they will be private and final by default. I will take the same Student class of the earlier sample code and convert it to the Record.

Yes, that’s it. That simple record keyword took care of all the boilerplate code we have to generate unnecessarily. And now, you can use it as you use the normal POJO class. Why don’t we now jump to the different parts of it, shall we?

The Constructor of Java 16 Record

By default, it gives us the public constructor with the exact parameter we used while declaring the record. This is used the same way we used it in POJO. For example.

This will be called this,

So, whatever fields you put in the creation will be your default public constructor. But what if you want to do something in the constructor? Such as validation? Let us see that in the next block.

Let us say, in the Student record, we don’t want negative or zero as a value. And we don’t want the name to be null. And we want all of these to be validated in the existing or default constructor. For this, we need to do the following.

As you can see, I declared a constructor-like block without a parameter bracket and wrote the logic there. In this block, you can access the field directly with or without this keyword.

Add Another Constructor in Java Record

Now, that we have seen how we can modify or do some extra login at the time of initialization of the default constructor, let us see how we can create another constructor.

Getters generated by Record are not similar to our normal POJO getters. It doesn’t use get as a prefix instead the field name with (). So for our Students and Employee, it can be called like this.

By default the toString() value of a class, like Abc, is Abc@69d0a921. Which doesn’t seem to be the best output to understand its content of it. So we have to override the method and do string concatenation. In Record, it gets generated automatically. For example, printing the Student and Employee objects we created earlier will be printed as follows.

Equals and HashCode in Java 16 Record

To check whether or not two objects are the same, we use equals(). And hashCode() is something we need to override in case we create our own equals(). In case equals() If this is true, then both Objects must have the same hashCode(). The combination of these two methods is used in Set and Map. I have explained them in detail in How HashMap Works in Java, so please check it out.

These methods must be overridden carefully as they will hugely impact the output in case we are using them in Map or Set. With Record, we don’t need to worry about that as it takes care of these things automatically.

If and only if all the values in both the records are the same then only you get the same hashCode and true in equals by default. In the above example, if I create another Student object and use a different rollNo then the result will be the opposite of the earlier one.

You can define the static variable and classes. Earlier, in the preview, the static members inside the inner static class of the Record were not allowed, but you can do so now starting Java 16. You can pretty much do all the things you do in a normal class.

You can do inheritance in Java Record by implementing an interface, but can not extend other classes. The reason is that a record internally converts to a class that extends Record.java, and as you know multiple inheritances are not allowed in Java, explained here.

That’s it for this post. I have covered the basics of Record of Java 16. It is just like a normal class but with special features. It will greatly improve productivity and reduce redundant code exponentially. No extra library of Lombok is to be set up in the project anymore.

How to Achieve Greatness in JDBC Performance