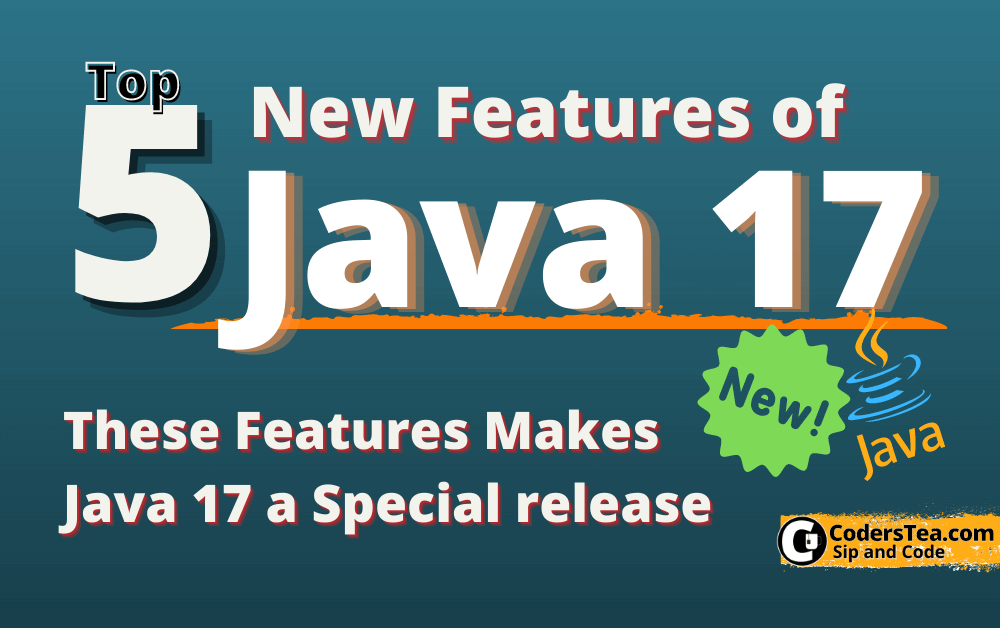 Hey, Tea Lovers! Java 17 is about to release in September 2021, so I thought now would be a great time to give you some updates on what is there in Java 17. I list down some key points about Java 17, that makes it special.

This list is generated based on what I think will affect me on my project if I use Java 17. There are other features as well which are great and required for the enhancement of Java. I list them down at the end of the post to read them in more detail. Now let’s look at the features, shall we?

Java 17 is An LTS Release

Java 17 will be a Long Term Support aka an LTS release.

As you must have known that Java has adopted a 6-month release cycle. This means it will release a new version of Java every 6 months. And after every 3 years, an LTS version will be released. Currently, Java 11 is the LTS version, released in September 2018. But After Java 17 releases, it will be the latest LTS support.

Many organizations rely on LTS versions, so they are using Java 11. But After Java 17 releases they will use Java 17 (probably).

Since releasing Java 9 to Java 16, Java has added a lot of features and improvements for that Java developers were longing for. And looking at it, we can say that Java is slowly and steadily catching up to the other programming languages. It makes a Java Developer feel happy, as we were tired of hearing “Java is Dead“.

If your organization is using Java 11 then read my post about Java 11: The Things I Love and Use from Java 11.

As mentioned in my previous post about new features in Java 16, I talked about the preview feature “Sealed Classes”. It is now out of the incubator and available in the actual or core library of Java 17.

This provides a more declarative approach than the access modifier to restrict the use of superclasses.

Java 17 provides new interface types and implementations for pseudorandom number generators (PRNGs). It has introduced a new interface named RandomGenerator. The goal of this interface is to supply a uniform API for all existing and new PRNGs.

All these interfaces extend RandomGenerator the interface.

The goal of this feature is to

With JEP 403, Java is strongly encapsulating JDK internals. This means it will restrict users from directly using the internal contents of Java and encourage users to use standard APIs. The reason being using internals may cause issues, especially in security. The goal of this feature is to:

Another security update is JEP 411: Deprecate the Security Manager for Removal. Well, not exactly an update but rather a step toward the removal of a feature. The Security Manager dates from Java 1.0. It has not been the primary means of securing client-side Java code for many years, and it has rarely been used to secure server-side code. So in the upcoming Java release, it will be completely removed from Java.

Preview for Pattern Matching for Switch

This feature introduces an advanced version of the switch case. It’s a preview feature and won’t be available in the standard package.

In Java 16 we got the feature “Pattern Matching of instanceOf”. Similarly, this switching pattern matching feature will improve the switch expression from plain old single equals type. Here is a glimpse of a code for switch expression.

You can see more examples and detailed explanations about this feature on JEP 406.

Conclusion and Other Features and Updates in Java 17

As I said earlier, these were the features that I think will affect our choice to use Java 17. But there is a total of 14 new features in Java 17. Here is the list of features:

6 Biggest Developer’s Mistakes That Must be Avoided