Home Life 6 Biggest Developer’s Mistakes That Must be Avoided

6 Biggest Developer’s Mistakes That Must be Avoided 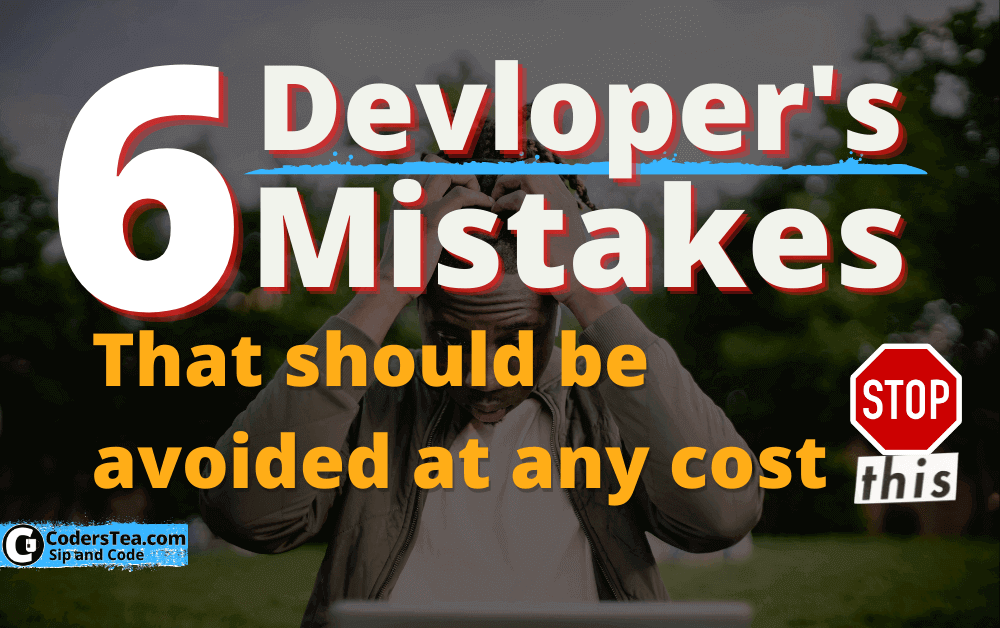 Hey, Tea Lovers! Let’s discuss what developer’s mistakes you should avoid to make your life easier. From my personal experience, I would say the following 6 Mistakes are the biggest developer mistakes out there. I did those mistakes, probably some other senior person did them too. But If you are just starting your career in development or haven’t realized these mistakes yet, then please do consider avoiding these. A developer’s mistake can not be seen easily, so we do these mistakes without even realizing them. Let’s see what these 6 biggest developers’ mistakes are.

Do you know what’s the most underrated developer’s mistake for beginners is? The one which haunts beginners more than any other? It’s Overwhelming Yourself with Too Many Things.

There are thousands of programming languages, and hundreds of technologies to plan, run, store, or deploy the software you make. With this list, a beginner tends to confuse themselves. They think how can I learn this many things? And gets scared to start anything at all. Beginners get overwhelmed with this huge number of things.

Someone said, start with C language, now you are learning C, next minute you heard about C++, now you are on to it. The very next day you read somewhere Java is popular then again you jumped to it. Someone whispered python, and here you go. It happened to me while I was in college. I was jumping to one another every semester (not like I was learning a language the whole sem). And seriously, I didn’t even know what I have tried my hands on. In the last sem struggling to prepare for the job I came to my senses somehow and stuck to Java.

Jumping from one thing to another, and learning too many things, at the same time won’t reach you anywhere. It will just make you more stressed.

Focus on one thing at a time, master it, then move on to the next one.

If you learn one language properly, you will learn another very easily. The learning curve at the start is steep, but up ahead, it grows exponentially. Trust me. All programming languages work or behave almost similarly, it’s just that their syntax and some inner working are different. So don’t overwhelm yourself with too many things. Be calm and take one step at a time. And avoid this beginner developer’s mistake.

What does Hungry for Popular things even mean? It’s similar to the developer’s mistake of overwhelming themself with too many things. But this time it’s to leave everything for a popular one. You get curious about every popular language one after another and just forget about the previous one. It’s ok to be curious. It’s curiosity, after all, that made us, humans, distinct from other animals in this animal kingdom. The problem is not giving yourself enough time to get master even one thing. You constantly switch to another one.

To avoid this developer’s mistake, you shouldn’t just leave everything at the very beginning. Keep the one you have and experiment with another side by side. You will achieve both mastery and solve your curiosity.

The biggest Developer’s Mistake is not Building a Solid Base

Have you ever seen a building that is being built directly from the 2nd floor without the base, have you? I have not. Well, It could have been a different story if we had some GravityNullifyNiater (Background Jingle 😜: Doofenshmirtz Evil Incorporated!)

Similarly, we can’t just go to advance things unless we know the basics. This I think is one of the biggest mistakes we do at the beginning. Springing from advanced topics instead of basic ones brings your morale down and wastes your time. Trust me, improve and build a strong basic knowledge. The advanced elements or topics will find their way to you like the river finds its way to the ocean.

Not Following the Coding Standards

Now that I had known List, Map, String manipulation, files manipulations, streams, and whatnot, I was writing code like I was nailing it, and life continued. Then one day while pushing the code to production an old piece of code just blasted out of nowhere. It was way past my “Go home and watch Netflix” time. I hurriedly went back to the IDE, look up the code and after some time only one thing came to my mind, ‘who the hell wrote this code?”, And guess who he was?

I couldn’t understand what it was. The code and comments were out of sync, variables were telling a different story than the values they hold, and on top of that 600 lines of function. After some 4-5 hours of debugging, understanding the code, and cursing myself, I was able to solve the issue. Later I had to do so much email, documentation for the cause, what went wrong, and whatnot, solving the issue isn’t the end of it, you know. I skipped Netflix’s Stranger Things that day

Now It was time for confession and to correct my mistakes. I questioned myself if there is a better way to do it and how can I avoid this kind of issue. How can I understand my code even a few weeks or months later?

I searched for better ways of coding, best practices, and writing beautiful codes. One of the first books that changed the way I code, was Clean Code by Uncle Bob. It has had a tremendous influence on my coding style. It surely does save your future.

It’s not like you only have to read the books to be a better coder, you can search online too, and everything is free. I have written multiple articles on the same topic on coderstea. You can look at them under Best Practices.

So, please follow the standards, and accommodate them in your daily work. It makes your code more readable, and maintainable and improves your health (it will trust me).

Developer’s Mistake: Leaving It in the Most needed Moment

Code quality is the most common and key thing people neglect while coding. I also did it and I learned it painfully.

The best time to improve your code is right after you complete the code.

This very moment, when you just finish the code, you know what is happening in the code. A little push to yourself to look at it again and apply coding standards will improve your code quality tenfold rather than doing it after many days when we kind of forget little things in it. Time flows faster in the code world. One hour here, 7 Years on Code’s World.

So don’t just leave it as it is and go for Counter-Strike or PUBG instead, start your precious game a little late and re-read the code and look for possible cleaning. This way in the future, you will be most likely to play the game when everyone is looking for bugs in their code.

“I complete my task and project, I know everything, I can build anything”. Surely you can. But every day there comes new technology, new methods, and a better approach to the thing you have been doing your whole life. You are sleeping and dreaming if you think you know everything. Wake up, dude. We only know a drop in this vast ocean of knowledge. Improve your knowledge day by day.

Being humble about your knowledge improves it, and not diminish it.

I know, I made a lot of mistakes. But hey, that’s the best way to learn, isn’t it? A great man has said once,

Failure is the best teacher you will ever get

This post was just to tell you what not to do. I did it but you don’t need to. It’s good to learn from your mistake, but it is great to learn from others’ mistakes. I will be glad if you avoid these mistakes and jump-start your career. Please do let me know in the comments if it helped you. It will fulfill my purpose to write this post.

7 Must have IntelliJ IDEA Plugins in 2021 for Java Developers