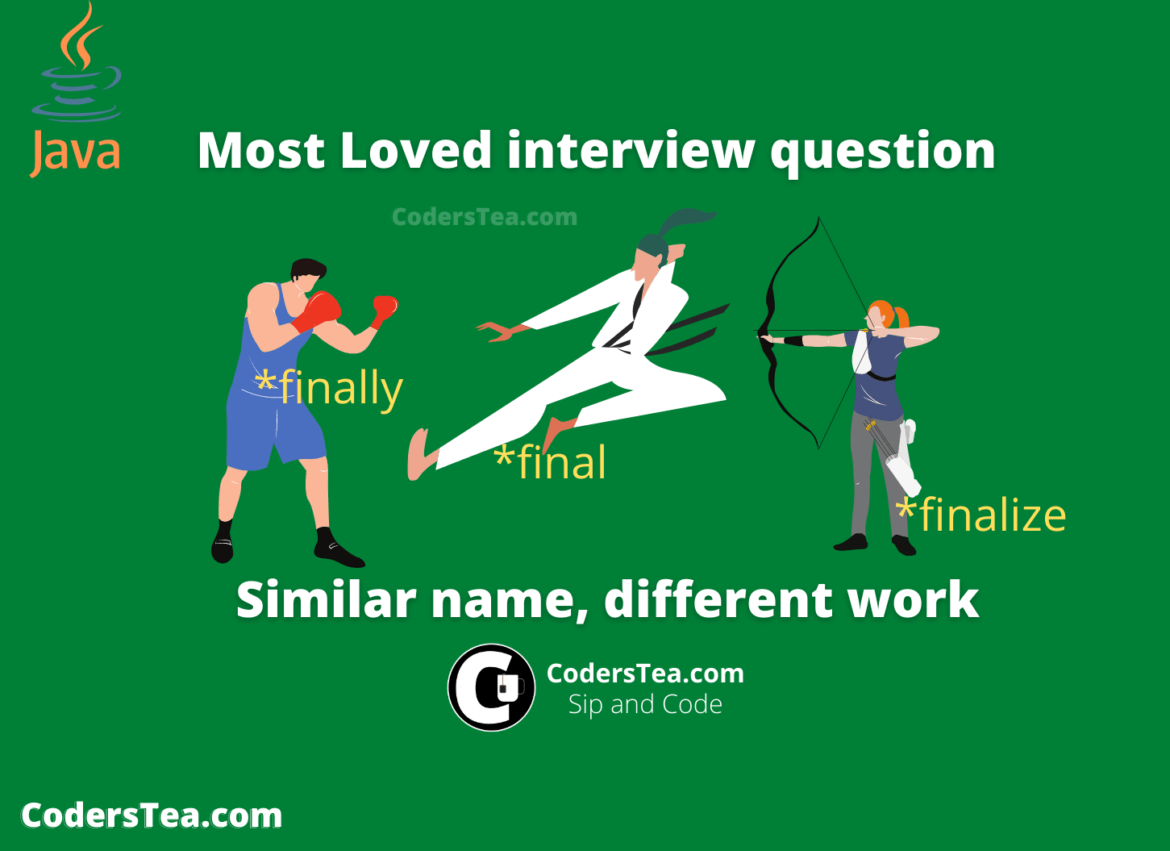 Hey, Tea Lovers! Today let’s look at the most asked, tricky, and fumbled interview question i.e. What is the difference between final, finally, and finalize in Java? Most beginners face this question. The thing is, only their names are the same the work is completely unrelated.

I know you are in a hurry to prepare for the interview, so I will make this post as short as possible. But before reading, prepare your cup of tea to sip and code.

For beginners, a word of advice is, don’t worry too much and enjoy your learning. There are things you will understand along the way, being humble about the knowledge is the key. There is always something to learn. But only reading won’t get you anywhere. You have to do something such as work on some projects. If you have any difficulties understanding please feel free to contact me on social media or comment.

final Keyword in Java: The Constant

final keyword is used for various purposes. It is used on variables, functions or methods, and classes.

the final variable in Java

One common use is to make variables constant i.e the value assigned to them can’t be changed by reassigning. For example, the PI value. The value does not change thus a constant value. So we can define the PI variable as a final and the value won’t be changed throughout its use.

the final class in Java

Another use is by classes. Put final before class and no class can extend that class. This makes the class unexpendable (if that is a word). For example, the String class is final. You can not extend the String class.

This comes in handy when you don’t want any other class to alter or mimic the class or immutable class, String. But many people argue that it violates the concept behind the OOP. But in the end, it all depends on the requirements, isn’t it?

final method or function in Java

In case you don’t want to allow the subclass to override the function mark it as final. This will prevent it to be overridden by the subclass. For example, if you have some business logic and want to enforce the same logic in all the subclasses. You can not override the final method, but of course, you can still call the method via the subclass.

The one thing common against class, variable, and method is that final is not allowing it to be changed. The final class can’t be subclasses so no modification in it via inheritance. Once defined, the variable’s value can’t be changed. The method isn’t allowed to change its behavior by overriding. So the final is to make things constant.

Sounds similar but no they are not twins. The finally keyword is used with the try-catch block. Run a block of code without considering if the exception is thrown or not. It will run after the try or catch block or we return something in between.

Used mostly in JDBC when we want to close the connection no matter the exception. Or while reading and writing the file, we have to close the stream or release the file.

finalize: The Last Wish Before Death

Unlike the other two, finalize is a function rather than a keyword. It is an overridden function of the Object class. When the garbage collector is ready to remove the object and can not see any other visible reference to the object, JVM calls this finalize method of the object. Before garbage is collected you want something to be done you can do it in the finalize method. However, since Java 9 the method has been deprecated.

final vs finally vs finalize

We talked about the difference between final, finally, and finalize. Explored in detail about them and a short comparison side by side. For beginners, it might be a lot to digest but trust me, it will get cleared once you start working. Most of the time interview is about tricky questions and answers like this. Just don’t lose hope to gain your knowledge not by reading only but by working on some stuff side by side.

I have posted some posts that will help you, such as “Mistakes Probably Every Programmer and I Made at the Beginning” and “Most Loved Interview Question: How HashMap works in Java“.

Hope you liked the post. If you want to discuss something and clear out some questions related or unrelated to this topic, please free to comment. or Follow us on social media. See you in the next post.

How to use groupingBy Collector in Java Streams