Home Big Data How to Run Flink Batch as Streaming 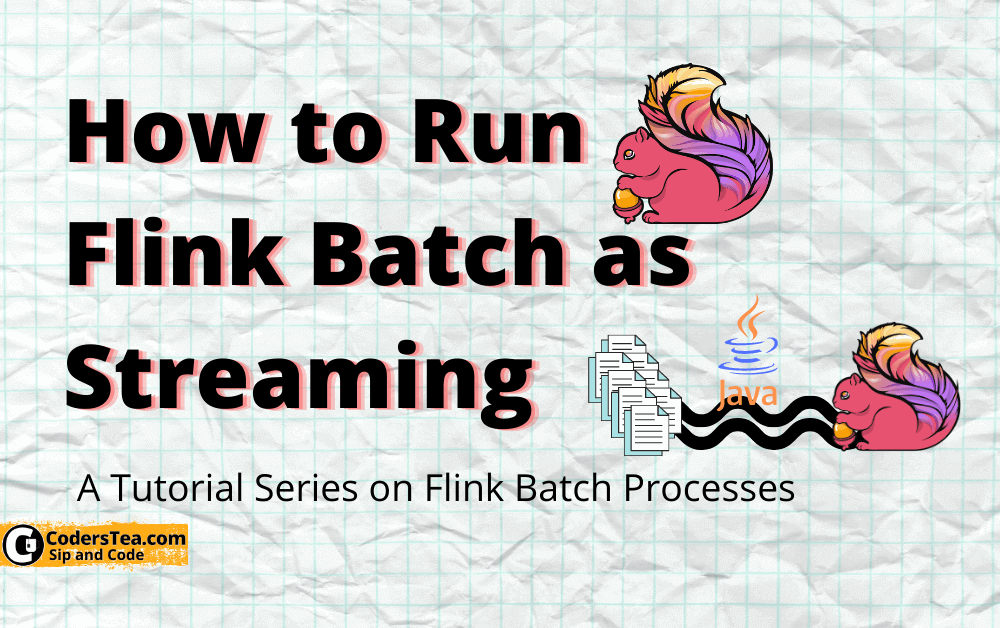 Hey, Tea Lovers! I will be writing a series of posts on the Flink Batch topic. This post is about the basic knowledge you must have to create a Flink Batch using Streaming. I will talk about what Flink Batch is and how it’s different from Flink Streaming. It will be a quick and simple post to get you started. If you like the post and want to know more about the Flink Batch as a whole, please let me know in the comment.

Why do You need to use Flink Batch?

The TL;DR is, it is used for bounded data i.e. data that has an end to it. Flink Streaming on the other hand is used for connecting event streams that are unbounded such as Kafka. These data or events keep coming and will never end (probably). But bounded data, such as Files, CSV or even a simple ArrayList have limited data. They have an end.

An example would be, your client sends you the files instead of Kafka Streams once a day. And you just need to run some operations and be done with it. This takes an hour or so. Then repeat the same task the next day. In this case, you have bounded data, a file. Which should be processed only once which takes about an hour or so.

You can’t do Streaming operations in these types of situations. So that’s why we need Flink Batch.

The thing you will be needing is a basic understanding of Flink architecture. Don’t worry, you don’t need to be an expert, as I am not😜. For simplicity, I will run in IDE only and not show the whole deployment process, it’s for another post. The Flink version for this example is 1.12.0. I suppose it will work from version 11 to the latest version 14. You can simply clone the projectFlink-Tutorial-CodersTea. And yes, that’s all you need to understand this post of Flink Batch.

Now let’s jump directly into it. The code could be found on GitHub.

Earlier, to process the bounded data, batch, Flink provided DataSet API. But in recent releases, it has been deprecated. The DataSet API was separate from the DataStream API.

We couldn’t fully replicate the pipeline of DataStram API in DataSet API. It resulted in rewriting the pipeline according to DataSet API, which to be honest, didn’t provide much flexibility and was very troublesome to work with.

I have one post on DataSet API where I explored one of the ways you can filter the files or folders as input, How to Select Specific Folders or Files As Input in Flink.

Ok, enough beating around the bush. Let’s jump into the new way of Flink Batch. This functionality or process Flink likes to call “Batch as a Special Case of Streaming“. The reason being you use the same pipeline for both Streaming and Batching.

You simply add runtime more in the execution environment setting i.e. setRuntimeMode(RuntimeExecutionMode.BATCH). And the remaining code or pipeline is constructed exactly as you do in streaming.

TheRuntimeExecutionMode has STREAMING, BATCH, and AUTOMATIC as values. Following is the explanation based on Flink Doc,

Flink says you don’t even need to provide it. As it will automatically infer it based on the input provided. But it’s better to provide it. You can also provide this info via the command line. This way you don’t need to change the code every time you switch to Batching from Streaming or vice versa.

Flink Batch as a Special Case of Streaming Code

Let’s create a CSV file for my expense report. For simplicity, this will contain two columns. Category and expense amount. Flink will read this, aggregate the expense amount based on category, and print it. Simple. I will try to explain the main pieces of the code.

As I said, it will be a simple CSV file. I won’t be using any CSV parser and simply split the line by a comma. Here is the input file I will be passing to the Flink Batch code.

One thing which is different from Flink DataSet API is that there is no groupBy Streaming (at least not in Flink 12.1). We used keyBy instead. Also, we have to provide window what is required. I have passed the tumbling window and the timing is up to you.The full code is on GitHub.

The pipeline resembles the Stream API, which you can read more about on Stream API: The Hero Without a Cape.

As you can see it has grouped and summed the numbers by category. And you must have noticed I spent too much on Movies 😜. The number with > the sign (1>, 5>, 14>) is probably the task number or something, not sure. But please ignore that.

That’s it for this post. I will write the next post soon on the topic for the Flink batch series. The next post would be How to Sink Flink Batch Streaming to resolve the incomplete output issue. Which I guess is a pretty common issue. So please subscribe to our newsletter for updates or follow me on social media. The code for this post could be found on GitHub. or you can see the full project on Flink-Tutorial-CodersTea.

How to Install Apache Flink On Mac OS