Home Linux Why Developers Love Linux and Its Distributions

Why Developers Love Linux and Its Distributions 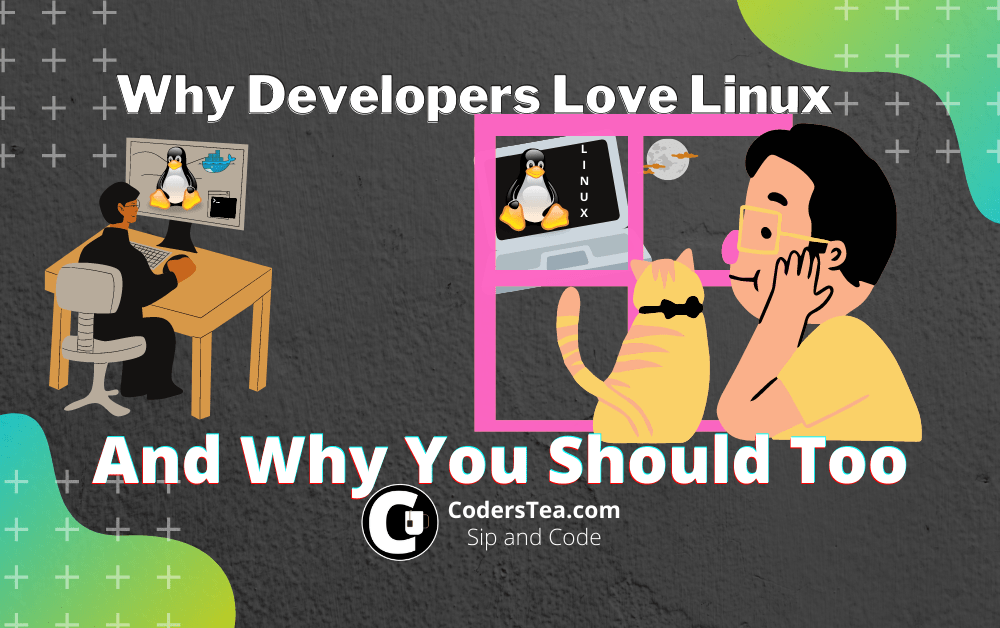 Hey, Tea Lovers! Today we will talk about Why Developers Love Linux. It’s a Kernel of Operating Systems that shapes our 21st-century technologies.

This post is not about how Linux work or the theory behind it. Instead, I will be focusing on the benefits of using Linux as a Developer. I will talk about how and why developers love Linux and also why Linux should be your first choice of yours for development.

Linux is a family of open-source Unix-like operating systems based on the Linux kernel. This has a wide variety of distribution. This means, for every type of user there is an OS that they can explore as per their imagination.

Linux kernel manages all of the hardware resources associated with your desktop or laptop. To put it simply, the operating system manages the communication between your software and your hardware.

It is a very popular OS. Android OS is built on top of the Linux kernel. Linux also powers many other internet and business servers, including numerous stock exchanges around the world. It has been around since the mid-1990s, give or take. Linux is everywhere today.

Some of the common Linux distribution hierarchies are something like those shown in the following image,

Linux was created keeping programmers in mind. Why would you go anywhere else when you have an OS that was built precisely for your needs? People often argue that Linux has a shortage of user-friendly or GUI applications, but as a developer, you get all the tools you need.

Linux has a ton of apps to choose from

In Linux, an application is a bundle of packages that are maintained as per your distribution. For example, Debian has the apt package, Arch has the Pacman package system. Package managers let you easily install the software you need with only a single command.

If you don’t want to use the terminal to install the application then you can use the distribution’s software store/center which has all applications similar to Google’s Play Store or Microsoft Store.

Support for Almost All Programming Languages

Great support for most programming languages
& Perfect For Programmers

Normally, the programming languages are not operating system specific but Windows has some specific development for Visual Basic/C#. It should work on Linux though. but I personally never tried, so can’t comment on that.

Scripting languages are available to the Linux system by default, and as a programmer, it is really helpful.

If you do run into support issues, you can usually get your hands on the required packages from Linux’s distribution repositories.

Linux is Simple to Learn

Learning Linux distribution is very easy. There is a misconception that to use Linux, you need to learn commands. On the contrary, we have various beautifully designed GUI environments that can give tough competition to Windows or Mac UI.

In Linux, you have a wide variety of desktop environments to choose from. such as Gnome, Xfce & KDE, and many more. This changes how your desktop looks and feels in use.

Each distribution comes with there own or modified version of the desktop environment. They have their flavor or look. You can select one based on your requirements. For Example, Xfce runs with minimum configuration or if you want a modern OS look then you can select KDE or Pop.

The biggest reason we love Linux is because of its open-source. Whenever you face any problem/challenge/issue, then the same thing must already be reported and solved by some person on the internet. A simple google search will give you an answer. Open Source Community and many volunteers are ready to help & you will get a solution.

Linux, being open-source, is free to download and install on your computer, unlike Windows or Mac. This makes it great for software developers, whether they are a hobbyist, students, aspiring programmers, or a professional. Most of the software for it is also open-source, which is a great bonus.

Linux Expertise is a Desirable Skill in Market

Now a day, learning and using Linux is a necessity for a developer. As I mentioned Linux is being used almost everywhere, so knowing Linux is a must for developers. And if you have any experience in Linux then you may get a higher priority among other developers in a company.

Learning to use Linux can land you a great job

Most Linux distributions release new updates at least every six to nine months. Hardly there is any other operating system that releases updates this frequently. Also, they always have different channels such as alpha or beta to give an edge to the developers to get the taste of newer versions way before they are being released.

There are hundreds of Linux distros that are in active development and being open-sourced, Linux has a big community presence and is always available to help. Developers love Linux because they like to contribute.

All newcomers can find help on any of the Linux forums. If you are stuck somewhere in your development process or need help in your coding process, just Google it. You can find several Linux-based helpful resources. As I mentioned earlier, for almost every doubt, there is an answer from the community. They are organized and supportive.

The hardware requirement increases exponentially after each update of OSs, as they try to utilize newer technologies. On the other hand, Linux has some flavor/distribution which can work with only 256 MB of RAM coupled with an outdated processor. So you can still make use of that old piece that is just sitting there.

So, being an efficient OS, Linux distributions could be fitted to a range of systems (low-end or high-end). This is the reason why most of the servers across the world run on Linux.

No need for antivirus / Secure

Another big reason why developers love Linux is no need for antivirus. Let’s admit it, Windows OS is vulnerable to different types of attacks or hacks. However, Linux is not as vulnerable. It sure isn’t invulnerable, but it has a lot more security features.

When you have Windows installed, you need to download/purchase an Antivirus program to keep your computer safe from hackers and malware. However, Linux does not require the use of such Anti-Virus programs.

Linux, with the process of package management, the concept of repositories, and a couple more features that make it possible to be more secure.

Linux is considered to be more secure than Windows. No antivirus is needed. Since it is open-source, several developers are working on it and everyone can contribute to it. Someone will likely find a vulnerability long before hackers can target a Linux distro.

That’s it guys for this post. Today We learned why Developers Love Linux Distribution. Hope you liked the post. I just wanted to list out the feature of Linux and also clear out some misconceptions anyone has about it. In a future post, I will come up with more articles to help you to switch to Linux without any hurdles. Also, what will be the best distro for you to use?

Let me know anything more that you required, Till then you can check the Best-Practices posts.

And keep supporting us by liking and share to our posts and also following us on social media for our latest posts and update.

See you at your next tea time. HAKUNA MATATA!!!

Welcome to CodersTea. Learn new things or explore better ways for existing ones in this programming world while sipping your cup of tea.

How to create a Multi-Database Pool in HikariCP

How to Use partitioningBy Collector in Java Stream API

How to Install Latest Java and Set JAVA_HOME on Ubuntu